After writing about the Mercury Tours training website last week I was feeling a little nostalgic,

so I decided to install it on an Amazon EC2 instance. There is a world of difference between installing something on a local server (or inside a VM) and putting it on a public server. 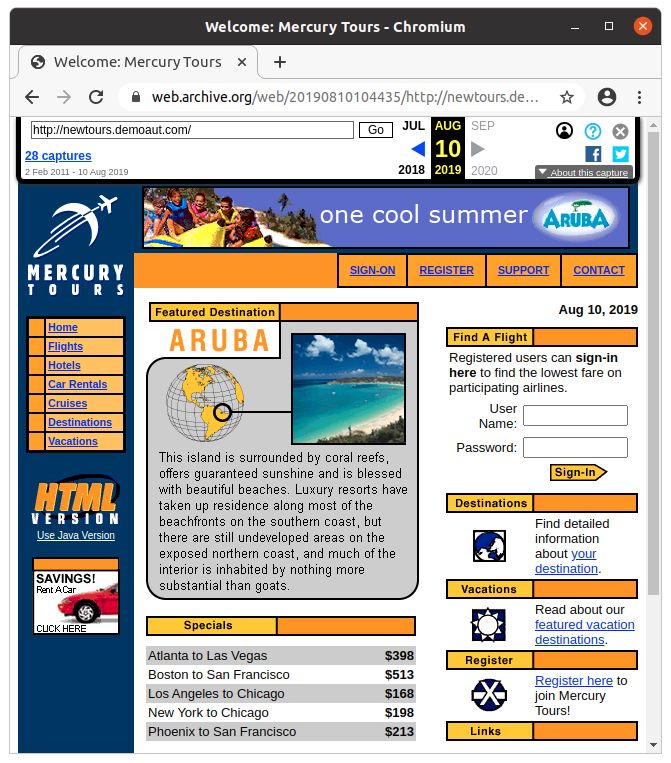 Mercury Tours only runs on Windows and was always intended to just be installed locally, so it has a single-server architecture. A file-based database means that it is not possible to have a separate database server and scale out the web server tier horizontally. The only change I made to the architecture was to put an Nginx web server in front of Apache for security reasons.

Nginx and Apache are set up to run as a Windows Service. A scheduled task was created to automatically renew the SSL certificate.

Security was my main worry when deploying Mercury Tours to a public server. The Common Vulnerabilities and Exposures (CVE) database had a long list of things that could be exploited. Putting a modern web server (Nginx) in front of it was a partial mitigation, but there were some other standard security practices to implement too.

These days, if I saw someone manually creating resources using the AWS Management Console, I would probably worry that they didn’t know what they were doing. Infrastructure as code is such an obvious benefit that it seems weird and alien to be deploying to AWS without using CloudFormation (or something equivalent).

The CloudFormation template for the Mercury Tours infrastructure (a single EC2 instance) creates 9 resources (a new VPC, subnet, Internet gateway, Elastic IP, security group, etc.) and takes a couple of minutes to create all the cloud components. Obviously it’s nice to have everything created automatically, and to have the ability to easily re-create the stack in another region or AWS account, but I also like the ability to cleanly delete all the resources used by an application by just deleting the CloudFormation stack.

As DNS was not managed within AWS, using an Elastic IP address meant that the CloudFormation template could be updated and re-deployed without having to update the DNS entry each time the EC2 instance was replaced.

Automating the installation and configuration of the software components would have been nice, but scripting for this is slow and unpleasant on Windows. All the software was installed manually and a new AMI was created.

It should be standard practice that anything deployed to Production has basic monitoring set up: synthetics, infrastructure, logs, and APM. Fortunately, with the release of New Relic One in July 2020, a complete monitoring solution is available for free (although the free accounts have limits on data volumes and user numbers).

Maybe not the best use of my time. The pain of deploying old software securely. difference between deploying something on a local