One of the most poorly understood VuGen Runtime Settings is the one that allows a performance tester to treat “non-critical resource errors as warnings”. The majority of LoadRunner users I have spoken to do not realise that enabling this setting can hide serious load-related defects in the system under test. 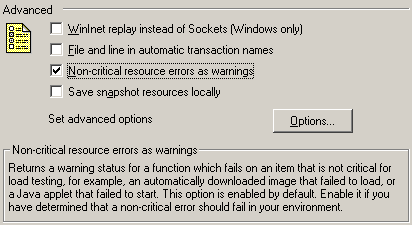 LoadRunner automatically detects HTTP 4xx or 5xx responses but, if this runtime setting is enabled, LoadRunner will ignore the HTTP 4xx or 5xx error code when requesting a resource (i.e. the current transaction will not fail).

What are “non-critical” resources?

The wording of this runtime setting is a bit misleading. There is no such thing as a “non-critical resource”, just resources, and non-resources. Examples of content types that are classified as resources by default are: images (PNG, GIF, JPEG), stylesheets (CSS), JavaScript, JSON and (sometimes) XML. Whether an HTTP request is for a resource or a non-resource is determined during the script generation step, immediately after recording.

The VuGen recording settings identify non-resources by their MIME type. By default, only text/html and text/xml are identified as non-resources. This omits some rather important MIME types that are commonly used for dynamic content, such as application/xml and application/json. 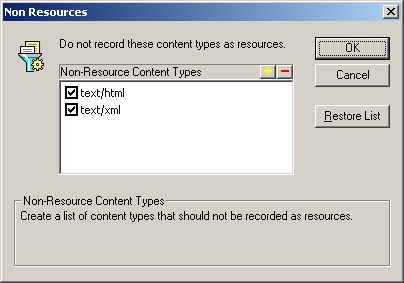 During replay, LoadRunner uses the "Resource=" function argument to determine if a request if for a resource or a non-resource.

VuGen has no way of determining what content types are dynamically generated on the server, except by looking at the MIME type returned during recording. Sometimes dynamically generated content is treated as a "non-critical resource", causing the performance tester to accidentally ignore critical errors.

My favourite example of someone getting themselves into difficulties is from the testing of a new HR self-service portal. Users could log on and view their payslips in PDF format. Each PDF was dynamically generated the first time it was viewed, and cached afterwards. During the load test the requests for the PDFs were returning an HTTP 500 error, but the performance tester didn't notice, as it was an EXTRARES in the script, and he had "non-critical resource errors as warnings" enabled. The only reason anyone found out about this problem was because the server admins were wondering why there were so many exceptions in their app server logs after the test. If your script downloads a PDF, please make sure that you check the PDF content to verify that everything is working correctly.

Even if you have successfully identified all the dynamic content types, and LoadRunner is treating them as non-resources, it is still important that all of the static content is downloaded successfully. By way of example, here is a screenshot of Amazon.com: 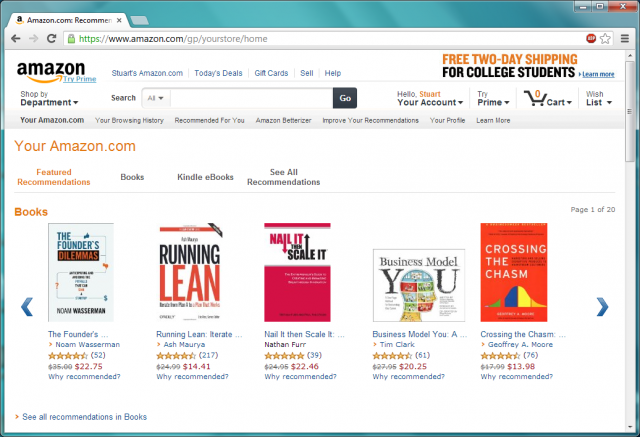 Here is the same page with most of the resources removed. A LoadRunner script with the "non-critical resource errors as warnings" runtime setting enabled does not detect this problem, and gives the transaction a status of "pass". If real users were seeing a website that looked like this when the system was under load, it would be a very high-severity defect, not something that should be ignored. 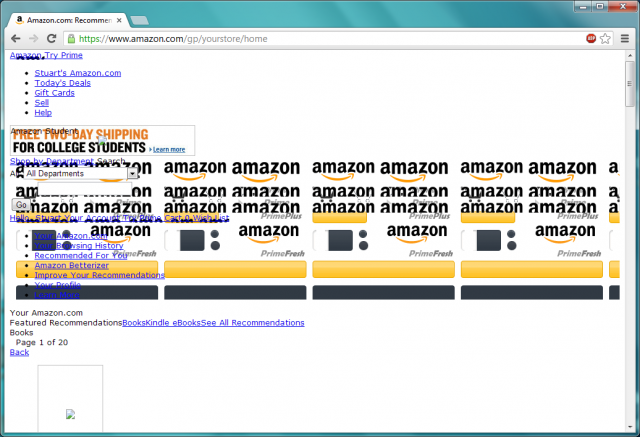 I can imagine that the Business owners of the new IT system would be very unhappy if their users were seeing a "broken" web page like this when their system was under load, and their performance tester hadn't told them about it.

How resource errors can occur under load

The main reason for load testing is that an application can behave very differently under load to how it behaves when there is only a small number of users. It might run slowly, or requests that normally work fine might suddenly start returning errors. Here is a great example from an ASP.NET forum:

I have an ASP.NET application that uses both an HTTPModule and several HTTPHandlers. Under somewhat heavy load (~25 req/sec) the application begins to return HTTP 404 errors for requests of a specific handler.

Even purely static content can behave differently when the system is under load. The sequence diagram below shows a product page being loaded successfully from www.example.com, but the product images are not loaded successfully, as they are hosted on another server which is overloaded. Perhaps LoadRunner gets a TCP-related error due to a connection limit ("failed to connect to server" or "server has shut down the connection prematurely") or an HTTP error code is returned. 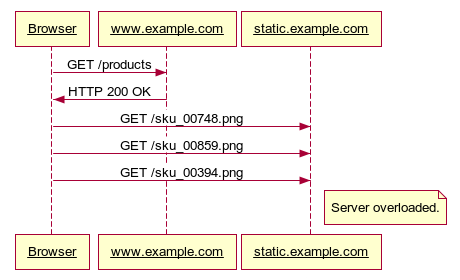 Web-based scripts should always disable (un-tick) the "Non-critical resource errors as warnings" checkbox in the script's runtime settings. This is the only way to be sure that this setting is not hiding errors during your test. 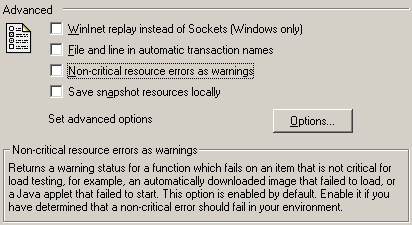 If your application seems to work fine manually, but your script fails during replay due to an HTTP 404 error for a resource, the correct work-around is to temporarily add a download filter for the URL that is failing, rather than hiding all errors of this type.

If you read this far, I am sure that you are wondering why HP leaves the "non-critical errors as warnings" setting enabled by default. We all know that errors are bad, and that the aim of testing under load is to discover errors, right?

It is easy to forget what it was like when you were just starting as a performance tester. Spare a thought for a junior performance tester who is attempting to record their first VuGen script. If their new script fails for a confusing reason (like an invisible 1x1 pixel spacer GIF being missing), then they might become discouraged. There is an obvious trade-off between this, and the risk of hiding serious application errors that occur under load.

Personally, I really want to help performance testers write better scripts; this is why I have developed the VuGen Validator, which highlights common scripting mistakes like enabling the "non-critical errors as warnings" runtime setting.