My car as an analogy for web security 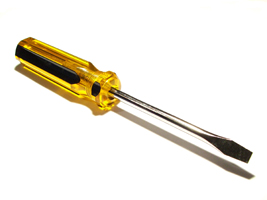 I live in a bad neighbourhood…well, okay, not a really bad neighbourhood but its close proximity to the CBD and its abundance of funky bars, galleries and restaurants is neatly balanced by a high concentration of government housing that seems to go hand-in-hand with junkies panhandling outside the supermarket, groups of people drinking in the street during the day, and the occasional stabbing near the public housing estate.

Anyway, living in my neighbourhood means that people keep trying to break into my car. I usually know if they have been successful when I find my car unlocked in the morning with the ashtray open and the contents of the glovebox tossed onto the passenger-side floor. Obviously they are looking for small change to feed a drug habit, rather than trying to steal the whole car.

I wasn’t terribly concerned by this until a particularly incompetent thief broke both my car doorlocks when they tried to open the door with a screwdriver. I had to climb into the car through the boot.

So I decided that I would make my car immune to that kind of attack. I installed a central locking kit and disconnected the key lock from the rods inside the door. For good measure I filled the keyholes with epoxy, so there wasn’t any tempting hole for screwdriver-wielding miscreants.

About a week later, I found that someone had jammed a screwdriver in the lock anyway. They hadn’t been able to get in, because the lock wasn’t connected to anything, but they had managed to bend the door paneling around the lock.

After some amateur panel beating, it was time for a rethink. I made little signs saying “no money in car” and stuck them on the window above each lock. I superglued a 1 cent coin over the top of the keyhole and covered the keyhole with electrical tape that matched the car body colour, and finally, I left the glovebox and ashtray open to show that there was nothing worth stealing inside the car.

So what lessons can we transfer to web security?