As a performance testing consultant, I get to see a lot of the work that other performance testers do…and a lot of the time it horrifies me. If performance testing was a licensed profession, like law or medicine, then it would be necessary to revoke the licenses of 90% of testers. Their work is not just “low quality”, it is actually wrong or misleading, or based on such a shaky foundation that any predictions made from the test results are tenuous at best.

Bad performance testers frequently treat their testing as a ritual, rather than as a science and they either ignore errors, or don’t bother to check for them in the first place.

Here is an example that a saw last week…

I was sent a report on a 12-hour Soak Test that had been run for a business-critical, public facing website with a large userbase – the kind of website that journalists love to write snarky little articles about when they don’t work. The report was one of the ones that can be automatically exported from LoadRunner Analysis (this is usually a bad sign). Unfortunately I can’t show you the whole report, but here is the graph of Running Users: 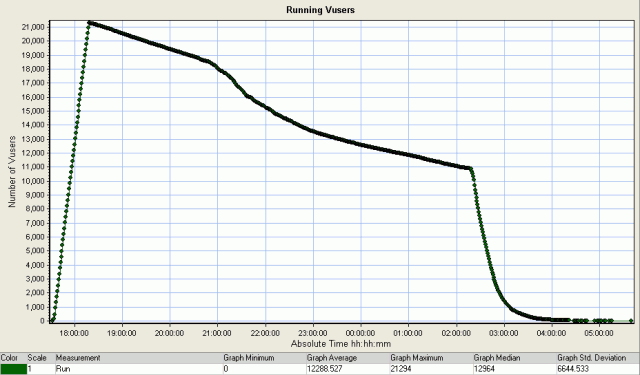 The Soak Test attempted to maintain a steady-state workload of 21,000 vusers for 12 hours (minus some time for ramp-up/ramp-down) but, over the course of the test, more than 10,000 vusers experienced a fatal error. The test report does not note that the test showed a catastrophic failure, and no severity 1 defect was ever raised.

If they believed that the errors they were seeing during their test were due to problems with their LoadRunner scripts, rather than the system they were testing, then they should have fixed their scripts and re-run the test before releasing results to stakeholders.

Other WTF moments in the report:

I see bad testing everywhere, but I see more of it from low-cost outsourcing companies. I can only assume that CIOs who engage these companies are pleased that they can get an incorrect performance test result for a cheaper price than a correct one.